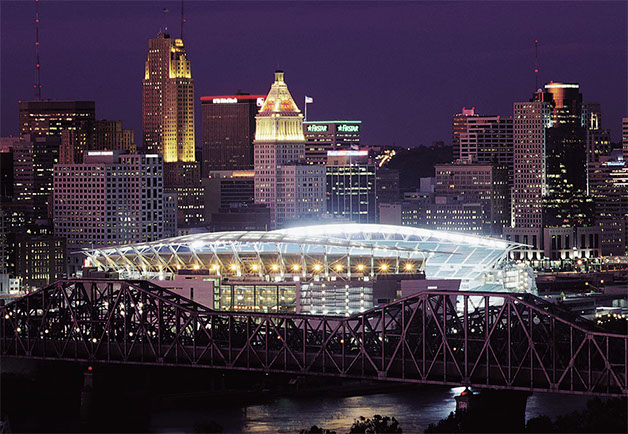 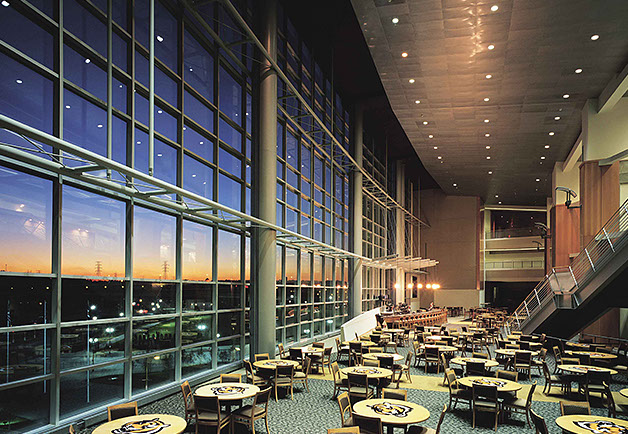 Built to showcase the NFL’s Cincinnati Bengals, the 70,000 seat stadium features a European-style cantilevered roof over the upper seating. The lighting design was an integral part of the design team who’s goal was to create a ‘Jewel within the City Skyline’. The lighting design group accentuated the facade, providing sparkle tothe surfaces of the building, highlighting an instant landmark along the Ohio River.

The lighting design included the club suites, restaurants, team retail space, and support areas. The players assembly space was designed as a multi-functional space, used for not only lectures, but also the video reviewing of games. The room was styled after a classroom with the tiered seating providing ample viewing for all players.

A wood finished sloped ceiling aided in the acoustics of the room. Large industrial style compact fluorescent pendant fixtures were used as general lighting with wallwashers highlighting the perimeter wall. A scalloped effect was achieved to provide interest to the all white walls. All fixtures were dimmable, controlled via a Lutron dimming system, with a touch screen located in the podium. Multi-lighting levels were pre-programmed giving the coach complete control and flexibility of lighting levels.